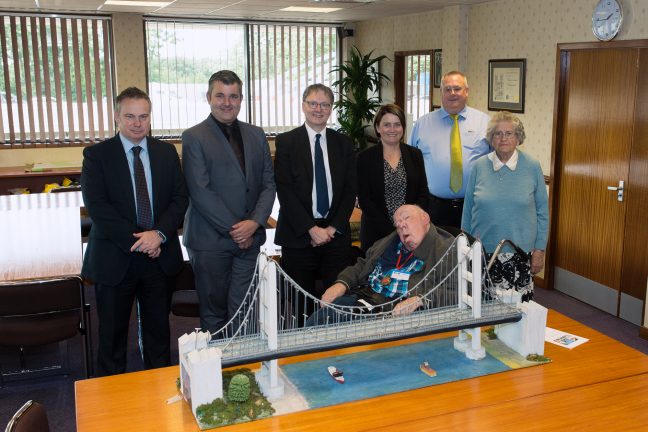 The Humber Bridge Board has paid tribute to the memory of a North Lincolnshire man whose passion for the bridge led him to create a large model, which was donated to the Humber Bridge team.

Roly Chafer of Barnetby passed away at the age of 88 earlier this month. The offer to donate the model, which he built in 2000, came about because he moved to smaller accommodation and his family was worried that it would have to be thrown away. The model was made mainly using matchsticks.

Mr Chafer offered his prized creation to the Humber Bridge Board and paid a visit in 2017 to present it to staff, who were delighted to accept it.

Humber Bridge Chief Executive Kevin Moore says: “We were so pleased to be offered this fantastic model to display in our reception area. It was a joy to meet Roly, his sister-in-law, Freda, and his care worker. Our hearts go out to his family and care team at their sad loss.”

Roly’s care worker, Su Skipworth, of the Leonard Cheshire charity, says: “Roly loved the Bridge. After his visit, he was overwhelmed and I remember him telling staff at the home that he’d met the top man and managers and they’d given him some books about the Bridge. The day gave him so many memories.”

The Humber Bridge Board made a donation of £50 towards Lindsey Lodge Hospice at Scunthorpe in memory of Mr Chafer, whose funeral was on 19th January.