The TAG Lane is for HumberTAG account customers and approved exemptions only. For all other crossings - please pay by card at the Toll Booths. 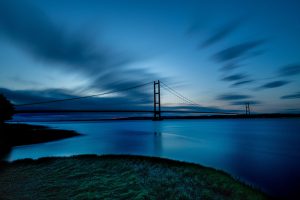 #YourBridge – the Humber Bridge photo competition which has been running throughout 2018 – has been won by September’s entry, themed ‘Views from the South Bank’.

The breath-taking picture, which features the bridge under an array of moving clouds, was taken by Tim King of Mansfield, Nottinghamshire.

His image will also feature on the front of the Humber Bridge Calendar 2019, which goes on sale early in the near year.

Tim said he was delighted to snap first prize in the year-long competition. He said: “Finding out I had won made my day, it was a fantastic surprise.

“I can’t wait for the masterclass and I’m really excited about seeing my picture on the front of the Humber Bridge Calendar.”

The #YourBridge competition was run throughout 2018 with each month having a different theme.

Photographers were encouraged to submit images that they felt best captured the spirit of that month’s theme, for a chance to feature in the 2019 Humber Bridge calendar.

The overall winner was then picked from those entries that had triumphed each month.

After a closely fought contest, Tim was crowned the winner.

Kevin Moore, Chief Executuve at the Humber Bridge, said: “Thank you to all the people who took part in the #YourBridge competition. We had some absolutely fantastic photographs submitted and in many ways it is unfortunate that only one can win.

“However, Tim’s entry really impressed the judges, making him a worthy winner.

“I’d also like to thank our team here at the Humber Bridge for carrying out their duties so professionally.

“Fans of the Humber Bridge can look out for our first official calendar, featuring all the #YourBridge winners, which will go on sale early next year.”