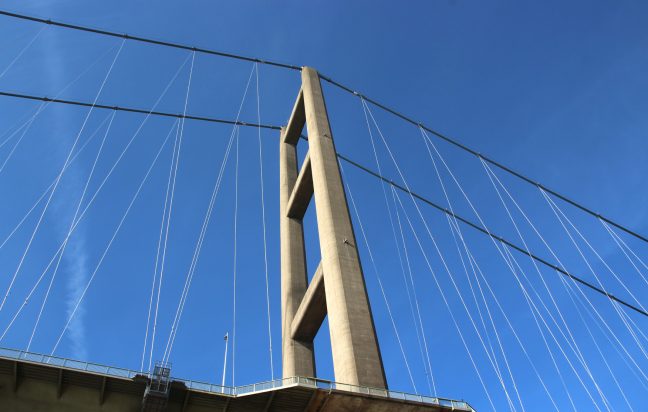 The Humber Bridge Board has successfully prosecuted four more people for climbing the bridge without permission.

The Board took legal action against Jay Swingler, Axel Grassi-Havnen, Peter George Taylor and Jesal Parshotan, for breaching its bye-laws. None of the defendants appeared at the hearings, which took place at Hull Magistrates Court on Friday 23rd March.

Swingler, 23 of Dudley, West Midlands,  and Grassi-Havnen, 21, of Sutton Coldfield, attempted to climb the bridge on July 26th last year.
This was followed, just days later, by London-based Taylor (18) and Parshotan, aged 28,  who illegally climbed the Humber Bridge on August 1st.

The Humber Bridge Board has now successfully prosecuted five individuals for unauthorised access to the bridge infrastructure. In January this year, daredevil BMX rider Ryan Taylor was fined £400 and ordered to pay £125 costs after he breached the bye-laws in May 2017.

Dr Kevin Moore, Chief Executive of the Humber Bridge, said the prosecutions should act as a stark warning to anyone contemplating illegal activity on the bridge. He said: “As these prosecutions demonstrate, we take a zero-tolerance approach to people illegally climbing the Humber Bridge. We want people to understand how dangerous these actions are to themselves and other members of the public.”