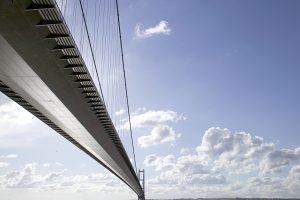 The Humber Bridge Board is today announcing a major upgrade to the tolling system, which will significantly reduce crossing times.

The upgrade, which will make crossings quicker and more reliable, will also spell the end of the toll booths.

The project is in the very early stages of development, but the first steps are underway with the Humber Bridge Board starting a procurement process for relevant consultants.

Councillor Sean Chaytor, who is Chair of the Humber Bridge Board, said: “The new system will have a huge, positive impact on crossing times, and with a brand new website dealing with payments, the whole experience of using the Humber Bridge will be significantly improved.”

Richard Hannigan, Deputy Chair of the Humber Bridge Board, added the upgrade would bring the north and south banks even closer together.

Cllr Hannigan, who is also Deputy Leader of North Lincolnshire Council, said: “Being able to cross the bridge more quickly further opens up the opportunity for people to live on one side of the estuary and work on the other.

“All in all, it is great news for our region.”

Andrew Arundel, Chief Operating Officer of the Humber Bridge, said the project was in the very early stages and would take time to come to fruition.

He said: “We’re aware that motorists might be concerned that work will get underway soon, causing further disruption shortly after vital maintenance work to replace bearings at the Barton end of the bridge was completed.

“This is not the case. The system is in the early design stage and work on the bridge itself is unlikely to start for some time. For the time being, disruption to motorists and other users will be kept to a minimum.”

The new system will be designed to make payment easier, offering a variety of ways to pay to ensure everyone is accommodated, including those people who prefer not to pay online.